I was working on making a locations page for a multi-location restaurant concept. The overwhelming trend currently is to include a Google map with a marker for each location.

Huge companies that have locations all over the globe have massive map databases and much different hurdles to overcome - being able to search by town or zip code, Wi-fi availability, hours, and so on.

For my particular project, I only had a few needs:

In order to do this, I was going to need Google Maps APIs, a part of Google Developers.

My biggest misconception with Google Maps APIs before looking into them is that you're embedding Google Maps as we know it into the site. I thought that by simply including a marker for the location, all the information would pop up in the sidebar, such as address and a search bar for directions.

This turned out not to be the case - you get the map, but simply including a marker does not lead to any of the expected actions. I figured out something that worked for me, and I'm going to write about the steps I took in case anyone is struggling in a similar situation.

API stands for Application Program Interface. For web development, this usually means a third-party software that you can embed into your website.

Google Maps APIs come in a few flavors - Android, iOS, Web, and Web services. Simply embedding a map into your site with a few markers falls under the web category, which is known as Google Maps Javascript.

The first step is to get an API key.

You'll have to agree to their terms and services.

They'll want you to give it a name and decide on any restrictions. If you place no restrictions on it, anyone can use it and use up your quota. The Maps are only free up to a certain point. 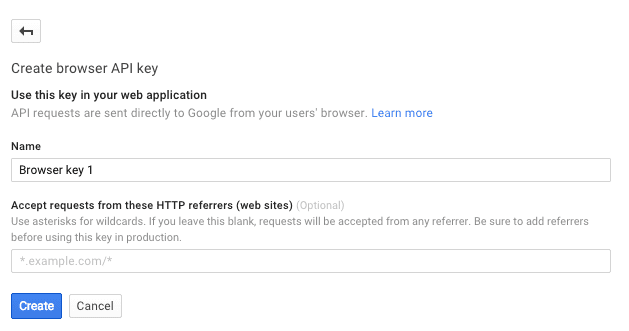 After that, it'll pop up with some super-secure looking string of characters, and now you have a key.

An API key grants a developer access to an API.

Now that I have a key, I can begin implementing Google Maps into my site.

Embed a Map Into Your Site

The documentation for Google Maps APIs is extensive. They have a pretty good "Hello, World!", or getting started guide. It's important to make sure everything is set up correctly before you can move on to attempting more advanced concepts.

As with anything interactive on the web, there are three components - HTML, CSS, and JavaScript. The example on the site puts everything into one file, but we'll just start off dividing them into three separate files, since that's how you'll have your project set up in reality.

I have a regular HTML5 document, linking to a CSS stylesheet and JS script. The map will be contained in the <div id="map"></div>. Of course, you must replace YOUR_API_KEY with the key from the previous step.

The CSS provided by Google is for a full screen map. I'm putting it in style.css.

The html and body classes need to have 100% height, as well as the map id. Setting the margin and padding to 0 resets the browser.

This code is fine, but I would prefer setting something along the lines of height: 60vh to the map id. 60vh would equal 60% viewport height, so would therefore take up 60% of the available screen real estate. This way, a user would be able to easily scroll past the map to whatever additional content you have. For the sake of this article, I'll just leave it at 100%, because I have no additional content.

At this point, you're finished with HTML and CSS as far as it pertains to the map.

The center is deciding where the map should be centered (Sydney, New South Wales, Australia) and zoom decides how far in it will be zoomed.

Now you should have a functioning map. 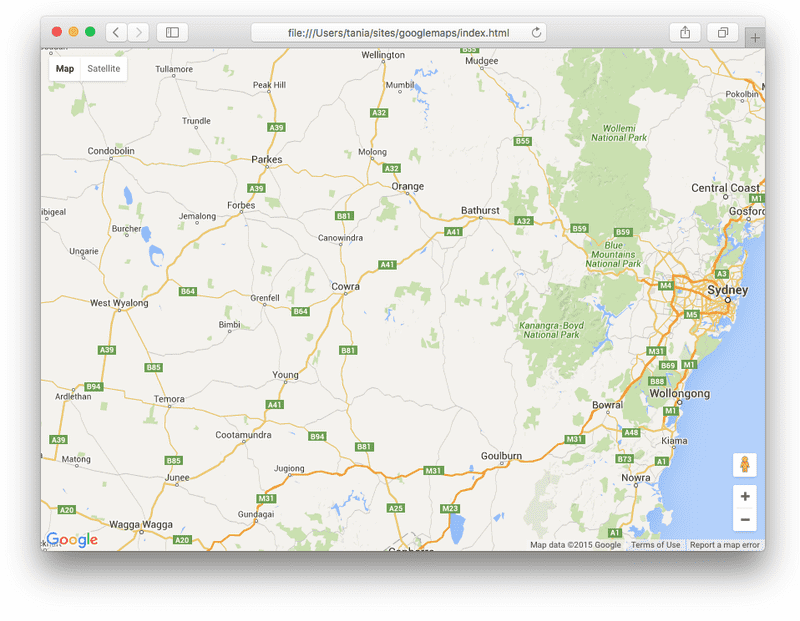 I have a map, but it doesn't do anything specific yet. You can zoom in and out, toggle between street and satellite view, and click-and-drag the map.

I wanted to add a marker, so I looked at the Markers page on the documentation. However, adding a marker does just that - and nothing else. I then moved on to Info Windows, which is adding details to a marker. I thought the pop up might have whatever information Google Maps has on the area, but an Info Window only contains your own content.

The Google Places API Web Service seems to integrate a bit more with the Google Maps database, but is also far more difficult to implement, so I stuck to the Google Maps Javascript API for my project.

In my search for a simple, effective way to include multiple markers with addresses and information, I found this excellent post on StackOverflow. I can't take credit for this solution. It's a very flexible bit of code that really helped me out on my project.

Let's define a goal and then make it happen.

For this I'm going to need to know the addresses of the locations as well as the latitude and longitude. Get Lat Long from Address is an amazing self-explanatory resource I found and used.

Here are my three locations.

The other thing I want is a URL that leads to getting directions to this location. For that, I simply went to Google Maps, typed in the address I wanted, and clicked on Get Directions. I can now get a link to the map at this point, so I click Share or Embed Map and get the URL. 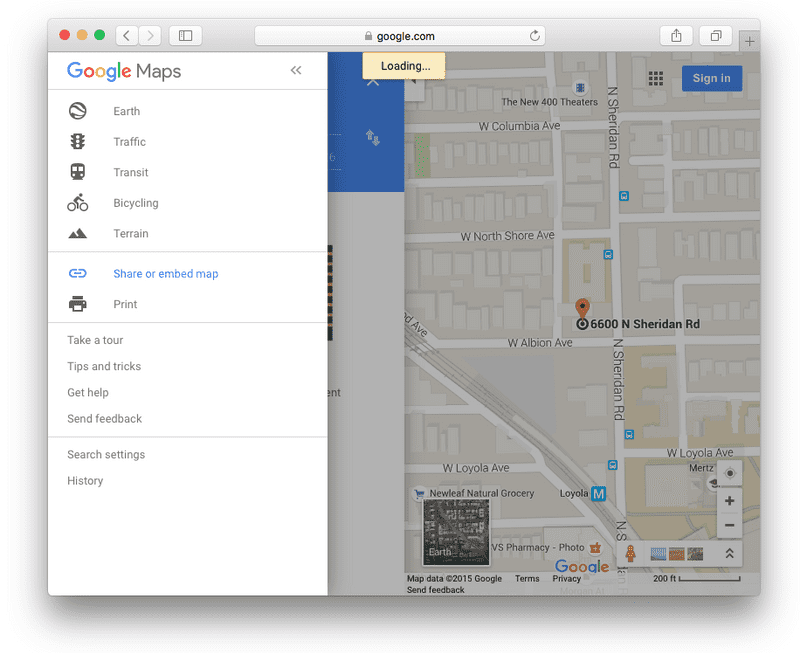 Now I have everything I need to build my custom map. First I'll call that initMap function.

Then I'll make an object for each location. Each object is a variable that will contain the info box, latitude and longitude.

info is a string in which I've written the name and address of my location, as well as a link to directions on Google Maps. Adding a \ at the end of a string line allow you to continue writing it on the next line.

Now I'm going to create an array in a variable called location that contains info, lat, and long.

I'm going to call the map the same way as I did in the "Hello, World!" example. I'm going to zoom to 13 because all my locations are close together, and center it on the latitude for Broadway, since it's the middle location.

With the final bit of code, the amount of markers and info windows will dynamically update based on our locations variable.

Here is the final, complete JavaScript.

Now all of our locations are on the map with their respective info box. 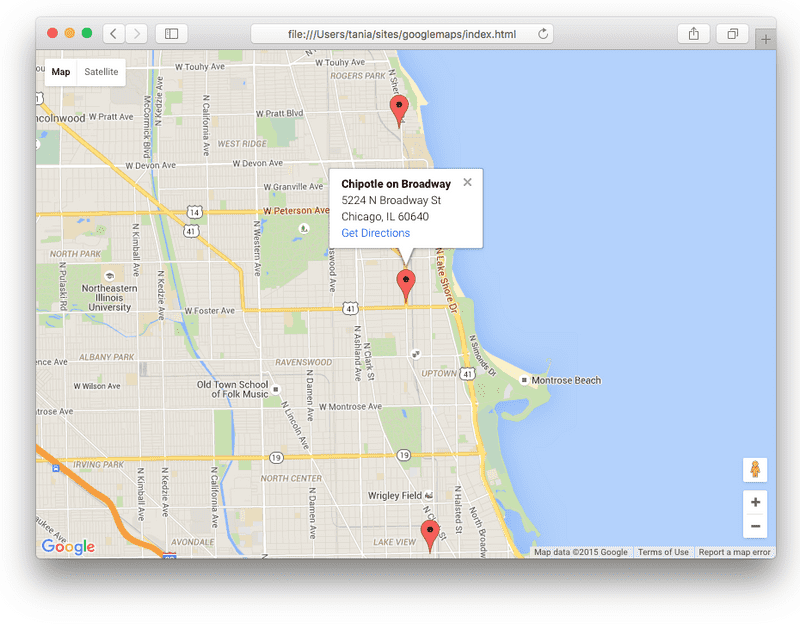