Create a Memory Game (ala Super Mario 3) with JavaScript

I was presented with a coding exercise to make a memory game using any language. I decided such a task really doesn't require any libraries like React or jQuery, so I made it with plain JavaScript.

Since the memory game reminded me of the card game from Super Mario 3, I decided to use that as the basis for the style of my app. You can view the completed demo here.

We're also going to use some ES6 and some basic DOM concepts, but you can learn and follow along even if you don't know them yet.

The premise of the game is to have a grid of 24 face-down cards. The card faces consist of pairs of matches. Clicking on cards will flip them over, revealing the value. When two are chosen, if it's a match, both cards will disappear. If it's not, the cards will flip back over to face-down. The game should be different every time the game is refreshed.

Click the demo below to get an understanding of what we'll be creating.

Before writing any code, we need to get an idea of the actual steps to take to go from nothing to finished product. Building this whole game at once might seem a bit overwhelming, but if you break it into small tasks, each task will seem achievable until it's done.

Now, there are probably a million and one ways to create this game. This is the way we're going to do it.

Each instruction will be a version. Version 0.1, 0.2, 0.3, until reaching version 1.0. I will place a link to the JavaScript file at the end of each version so you don't get lost. All of the versions can be found here.

First, let's create the setup. We'll create index.html, which will just be a regular HTML skeleton putting in JS and CSS. The entirety of the app will be contained in the game div, so this file won't change at all.

We'll add some basic styles, just enough for the app to make sense. No frameworks or unnecessary code here, or even any preprocessors. This is not a CSS tutorial so you should have an idea of what's going on here already, but I'm just creating a flex grid with cards. Each card is 150x150, and has background properties because we'll be adding the card images soon as background images. This CSS will be adjusted as we add a few more complex features to the code, like card flipping, but for now it's fine.

Now our HTML and CSS is set up, we'll focus on going through the steps with JavaScript.

The first step is to display 12 cards, each with a different value. To do this, I'm going to create an array of objects, and put it in the cardsArray variable. Each object will contain a name and an image.

Now we have 12 cards, but how do we display them? First, we'll grab the element I said would be the root for the entire app - the div with an id of game. We'll create a new section element, give it the grid class, and append it to the DOM inside our game root div.

So far all this did was add a section to the DOM. 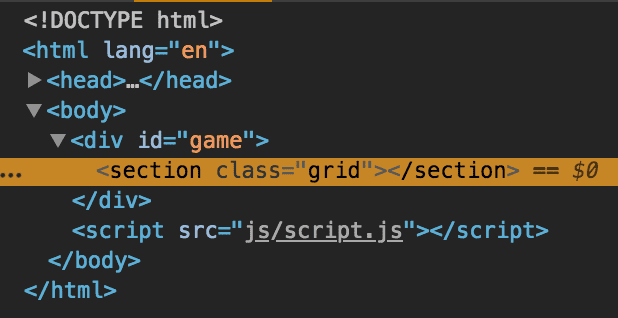 If none of this makes sense, please read The Introduction to the DOM article I wrote. You'll learn the difference between the DOM and HTML source code, and how elements and nodes work.

Now we want to get the images to display on the front end. We'll loop through each item in cardsArray with forEach(), create a new card div for each object, and set the data-name attribute and background-image style property of the div. We will then append that div to the grid. This will give us 12 divs in total. 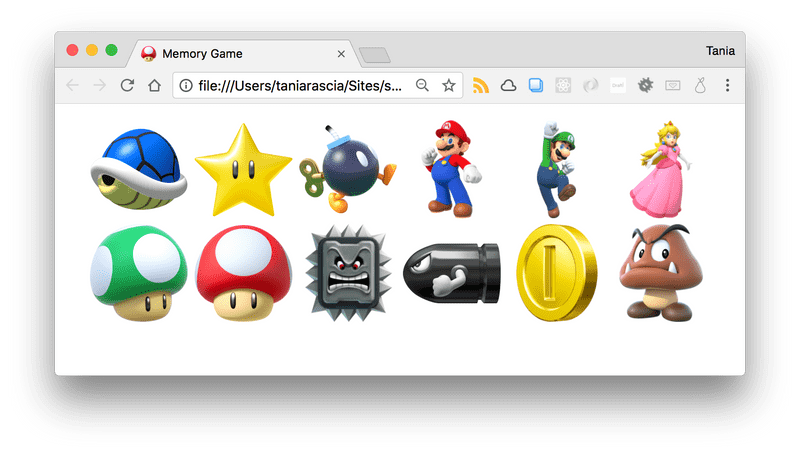 Well, that was a lot of work for step one, but now we have it! You will have 12 divs appended to the grid, and each will look something like this.

So, what's the point of the data-name attribute? Data attributes allow us to store extra data in an HTML element. Any non-standard attribute should begin with data-.

Duplicate the cards to have 2 sets of 12

Step two is much simpler than step one. Now we're going to duplicate the cardsArray array, then loop through that instead. First, below your array, create a gameGrid variable, and duplicate the array by using concat().

And there you have it. 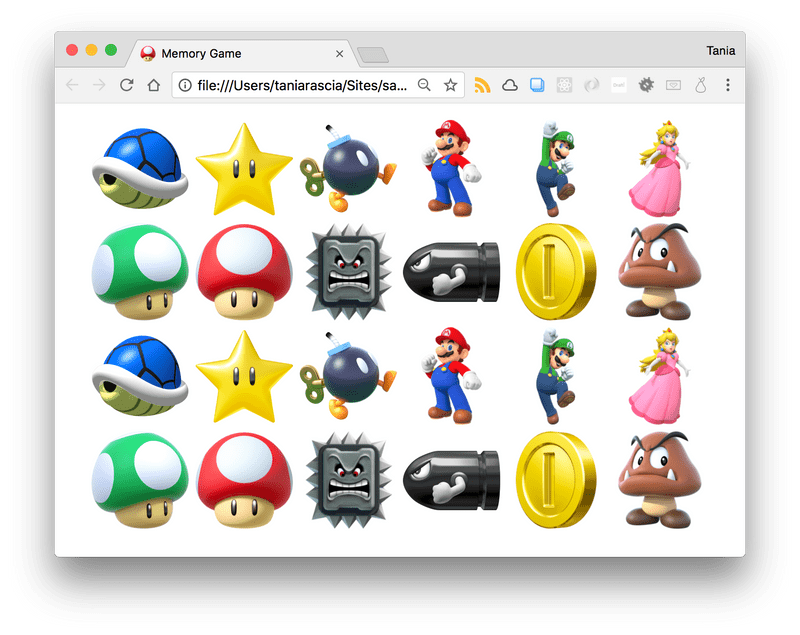 Randomize the display of cards

Shuffle the array using sort() and Math.random(). Don't get how that works? Here.

Place this code right after the declaration of gameGrid.

Have fun refreshing the grid over and over again. 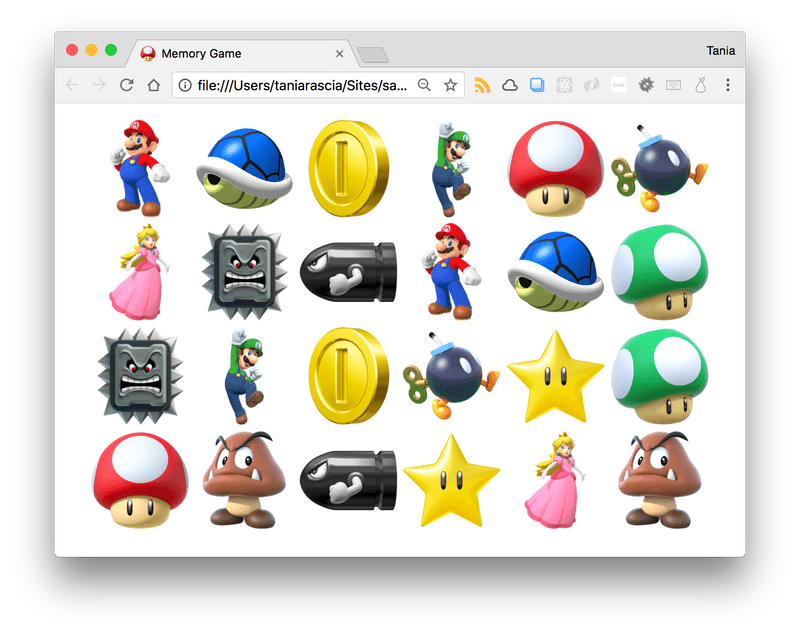 Now we should be able to select cards. I'm just going to add a simple CSS style so we can see selected items easily.

We'll add an event listener to the entire grid. Anytime an element is clicked, the selected class will be applied to it. Add this code to the bottom of script.js

Now every selected div will have a blue border, as defined by the selected CSS. 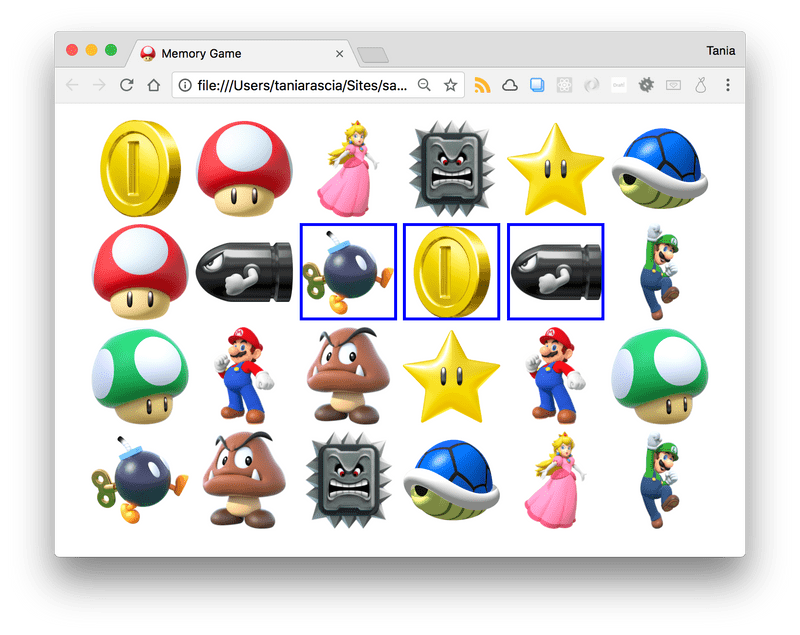 Only allow two cards to be selected at a time

We need to only allow two selections at a time, because we're testing if two selected cards match. In order to do this, we'll need to store the guesses and counter somewhere. First we'll just store the count.

Now we'll modify the event listener to have an if statement that counts to two, and only adds selected to two cards. We'll put our code to add the selected CSS inside the statement. 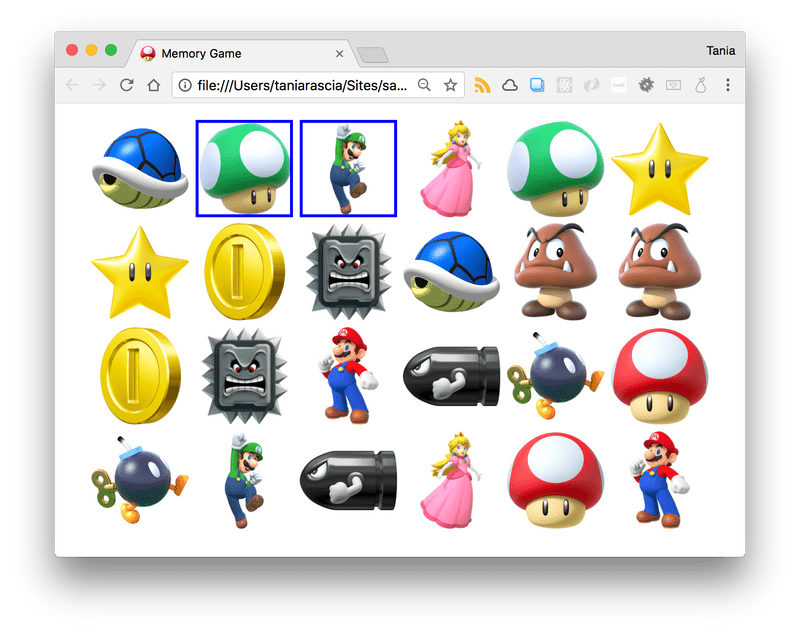 Determine if two selected cards are a match and hide them

Let's create some CSS for matches. I'm going to give them a red border to differentiate them, and remove the background image. Why would I do that instead of just removing them from the DOM? Because we need to preserve the space they used to be - otherwise, all the elements would shift and it would no longer be a proper memory game.

Where we just had a count variable before, we'll add a place to store the first and second guess as well.

I'm going to make a function for matching elements. This will just loop through all selected elements when called, then add the match class.

Now, the guesses don't reset, so we can only select or match one thing at a time. But if we select two elements we know match, the proper CSS will be applied. 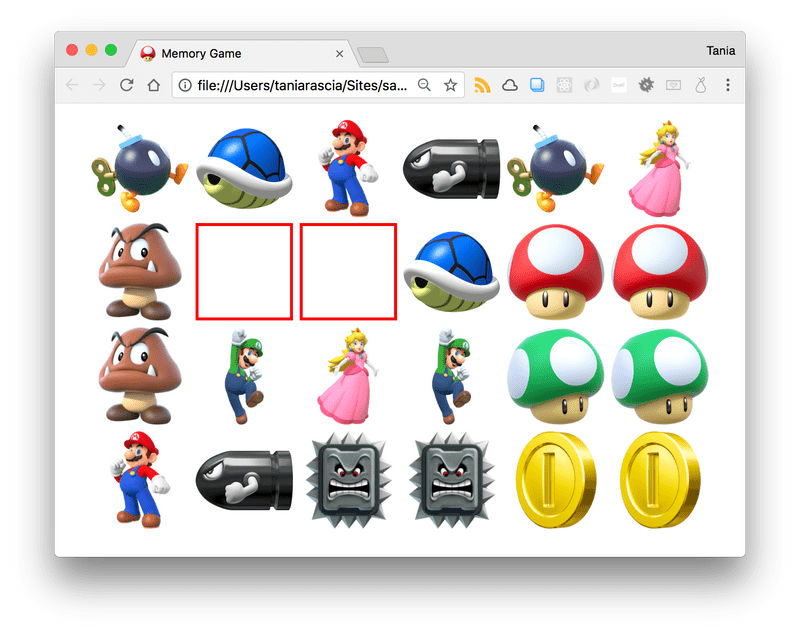 I'll assign the clicked value to prevousTarget after the first click.

Finally, I'll add that check to our return statement at the top of the counter.

Now a second click on the same element will be ignored.

First, I'll create a function to reset the guesses. This will set all counts and guesses back to their original values, as well as removing the selected CSS.

Then I'll add the resetGuesses() function to the match checker, on success or fail.

Now you can make multiple matches. You'll notice that the select style will disappear immediately if it's not a match, but this is fine because we haven't set any delays to allow it to display longer. 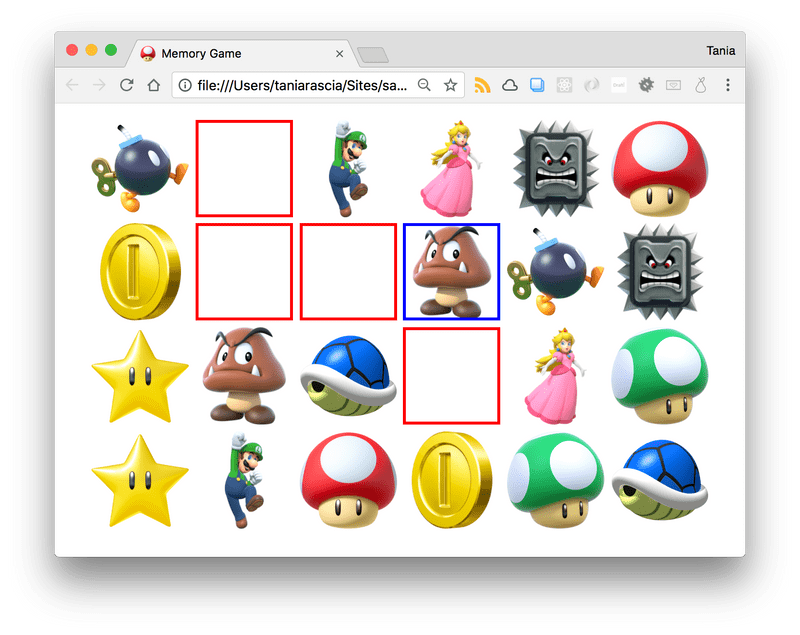 Right now, everything happens immediately. We want a delay after we make a selection so the user can see what their selection was before the card is hidden again. Right now it doesn't matter because everything is visible, but we can just take care of it before putting the final style touches on the cards.

We're going to use setTimeout() to make the delays. First I'll set my delay time, which I'm choosing to be 1200 milliseconds, or 1.2 seconds.

All I'm going to do now is put the functions from before in the setTimeout(), with the delay variable as the amount of time for the timeout to last. The functions become callbacks now, which are functions used as arguments, and they no longer need the parentheses.

Now we can see selections and matches for 1.2 seconds before they disappear. 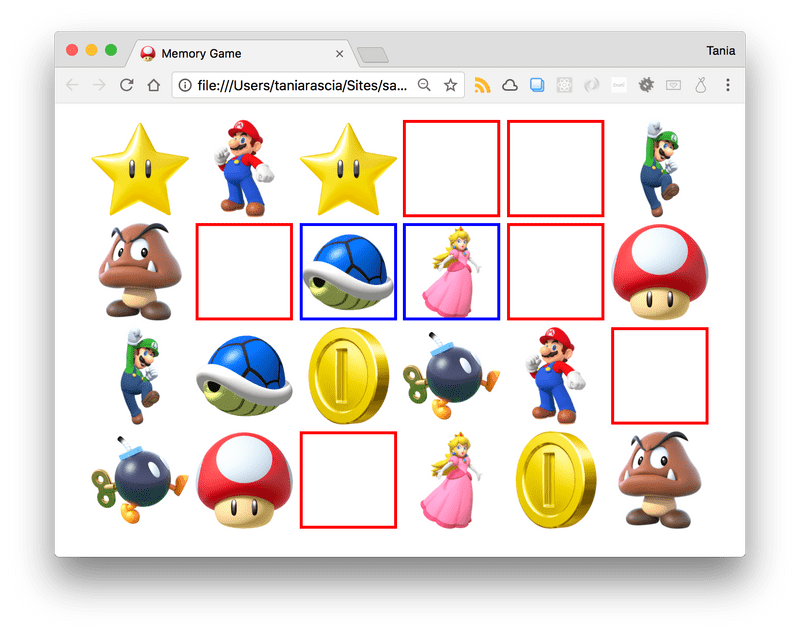 Show back of card initially and flip on select

When I made this the first time around, I had the cards hidden the whole time, which made testing unnecessarily difficult. This time I decided to hide the cards as one of the last steps, once all the functionality is there.

The game has all the functionality we want, but not the styles. We need to:

All of this goes together, and will require a few structural changes to the code. We'll have to add a bit more complicated CSS to get this done.

First, our cards have all consisted of one div right now. In order to implement the flip, each div will need to consist of three divs that will look like this:

We'll modify the card creation loop to add the front and back elements.

Where we had clicked.dataset.name and clicked.classList.add, we'll have to add parentNode now, since we'll be clicking on an inner div (front or back) and the data-name is still on the outer div (card).

Now we're going to go back to CSS for a moment. To get the flip to work, we're going to set each card as relative, and the back and front as absolute. All three will have the same height and width.

The front of each card (technically the back if you're thinking like a deck of cards, but I'm calling it the front because it's the default view) will be a question mark box.

The back will have all the properties for the background image to style property, and it will be rotated for the flip animation.

And that's all the CSS. 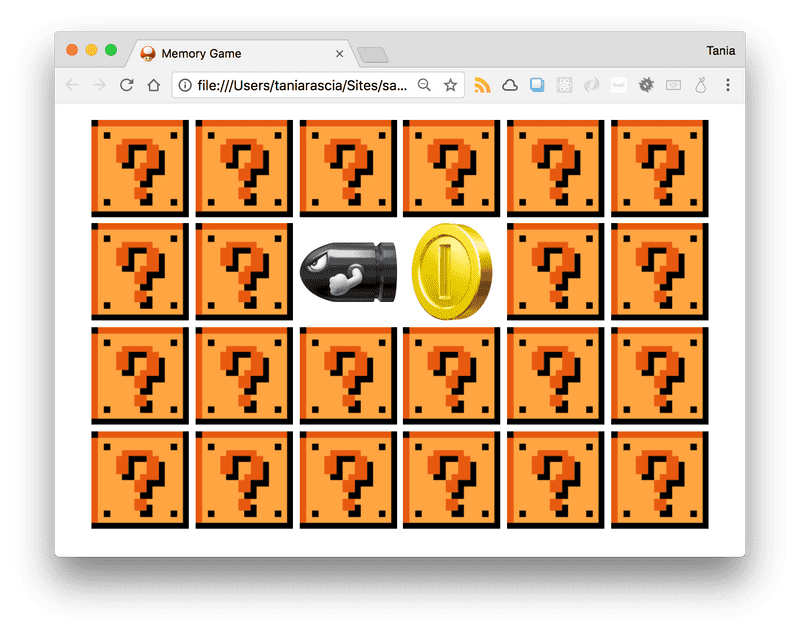 Can you find any problems with the current game? Right now, I see that I can flip over already matched items, so I'm going to disable that in the return statement at the top.

That's the last issue I could find! I added a blue background for a bit of a more Mario-ish style, and now it's done! You could extend this game further by counting and displaying the number of failed attempts, or adding a message upon completion, but I think this is good enough. 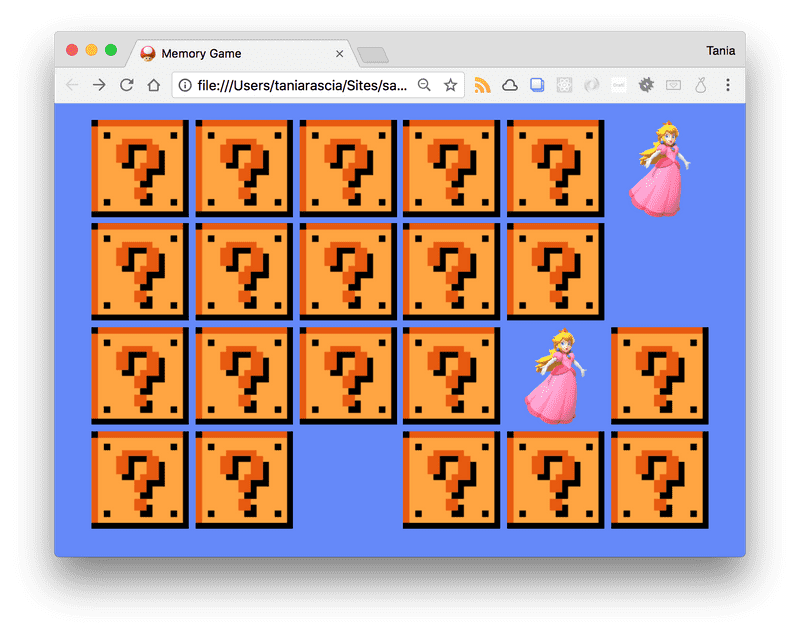 In this tutorial, we learned a lot about planning out an application before we create it, and breaking it up into small steps to make it easily achievable. We learned how to use plain JavaScript to insert and manipulate elements in the page, which will be helpful for anyone who only knows how to work with a library like jQuery. And we made something fun to play with. Enjoy!

Again, you can view the demo here, and view the source here. Questions, comments, and critiques appreciated.